Putting the IP in I.P.A: intellectual property in craft brewing

Putting the IP in I.P.A: intellectual property in craft brewing

The craft beer industry is booming. In the UK, the number of craft breweries jumped 7.5% from 2019 to 2020, with 3,018 now registered and a tangible rise occurring during the first COVID-19 lockdown as would-be brewers took the plunge. In the US, there are now 9000+ craft breweries, all aiming to tempt discerning ale drinkers with quirky flavours.

Robust independence of spirit is inherent in craft brewing. This is partly driven by a desire to kick back against the commercial brewing industry, and partly inspired by the creative and individual nature of brewing itself.

Purists would say that the quality of the beer is all that matters, but there’s no denying that branding plays a significant part in helping breweries make a name for themselves. It is here, among the humorous, pun-heavy, tongue-in-cheek world of beer naming and associated can designs, that the craft brewing industry frequently clashes heads with intellectual property rights.

Mary Berry and Gun’N’Roses in battle of the beers

Fancy a ‘Buzz Lightbeer’, pint of ‘Pickelodeon’, or half of ‘Hoptimus Prime’? Or maybe a bottle of Monty Python’s Holy Gr(Ale) – is more your style?

A glance down the “lists of most amusing” craft beer names” leaves no doubt that brewers take inspiration from popular culture. It’s not immediately clear whether the brewers of Buzz Lightbeer – a coffee-infused ale – have consulted Disney Pixar over their cheeky reference to the Toy Story hero, or indeed whether Budweiser might feel it has a case to make over the similarity between Buzz Light and its major Bud Light brand.

However, other brand owners have not been slow to defend their rights. In 2019, rockers Guns’N’Roses brought a trade mark infringement suit against brewers Oskar Blue, which had been selling Guns’N’Rosé beer despite earlier failing to register a trade mark for the name after objection from the band.

The craft beer industry’s slightly anarchic nature can backfire on brand defenders, however. British baking legend Mary Berry issued a cease and desist letter to a US-based brewery over its ‘Mary Berry Pastry Stout’, to which they responded by renaming it ‘Cease and Desistberry Pastry Stout’.

PR fallout should certainly be a consideration for brands defending against infringement by breweries. The case of HUGO BOSS vs BOSS Brewing, a small South Wales Brewery, hit the headlines after the fashion company sent a cease-and-desist letter following the brewery’s bid to register its name as a trade mark. As often happens in perceived “David v Goliath” cases, media interest was ignited and then fuelled as TV Presenter Joe Lycett weighed in on behalf of the brewery. Lycett’s stunt to change his name to HUGO BOSS, and his profile as presenter of a consumer rights programme, left HUGO BOSS looking like a trade mark bully.

Ironically, before the case hit the headlines, it had already been settled with BOSS Brewing agreeing to change the names of two of its beers. However, the subsequent publicity was a huge brand boost for the brewery, which reported a 50% uplift in supermarket sales and 30% increase in footfall to its taproom. 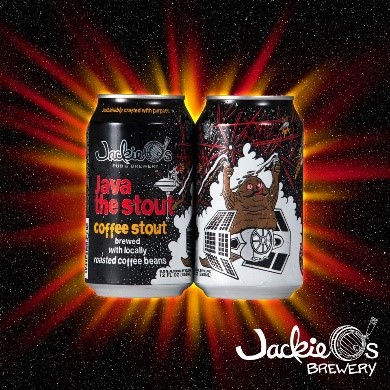 Can design has been termed ‘the new record sleeve’ when it comes to helping brands stand out in the industry. However, it is another area where craft brewers may sail close to the wind. A coffee-based beer named ‘Java The Stout’ might not immediately invoke a link to the Star Wars brand, but a can featuring Jabba the Hutt astride a TIE fighter certainly draws on the connection.

In this case, the brewer may be hoping to rely on the allowances made for parody, which can be designated as fair use of artwork that is otherwise protected by copyright. 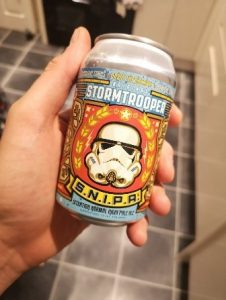 There seems to be a general approach of “asking forgiveness, not permission” in the craft brewing sector. Of course, this is not advisable from a legal perspective and breweries, who are for the most part small organisations, should be very careful before risking the financial and reputational impacts a major infringement suit would entail. Certainly, the number of cases where breweries seem willing to risk coming up against the might of Disney, is surprising.

The safest way is to come to an official license agreement with the brand owner, as Vocation Brewery has done with its Original Storm Trooper range of Ales and IPAs. The beer is licensed from Shepperton Studios and approved by the maker of the original Storm Trooper helmets, Andrew Ainsworth. It doesn’t ship to the US, presumably due to licensing issues.

Brewdog’s IP tussles on both sides of the debate

One of the UK’s most successful craft brewers is Scottish company BrewDog, which aims to stay true to its rebellious roots while also protecting its inventive brand concepts. This has led to finding itself on both sides of the IP fence.

In 2020, BrewDog noticed more than a passing resemblance between the packaging and identity of ALDI’s newly launched Anti-establishment IPA and its own Punk IPA. Calling the discount grocer out on social media, a good-natured interchange took place as BrewDog proposed marketing its own YALDI IPA. The end result was a collaboration that saw BrewDog’s ALD IPA launched in ALDI stores.

BrewDog had less success when trying to register trade marks for its best-selling ELVIS JUICE IPA. The late singer’s estate opposed BrewDog’s application to register ELVIS JUICE and BREWDOG ELVIS JUICE, prompting the founders to change their names by deed poll to Elvis and claim the beer was named after them. They were later successful in registering BREWDOG ELVIS JUIICE in the UK, but have been denied registration with the EU IPO.

Despite perpetually walking a fine line in terms of IP, craft brewing looks set to continue its upward trajectory. Literally, in the case of Elon Musk, who recently announced plans to produce a craft beer.

In typical Musk style, he is setting his sights beyond mere planetary domination and aiming for Mars. Musk-associated company Starbase Brewing LLC has applied to register “Giga Bier” and “Giga Beer” as trade marks in the US and says it is “aiming to be the first brewery on another planet.” This may give the USPTO and Starbase some interesting challenges around off-planet IP protection!

Certainly, the creative and entertaining nature of craft beer branding is all part of its charm, but breweries should beware they don’t cross the line into infringement. As always, the best plan is consult a qualified trade mark attorney for advice.

What are the most entertaining craft beer names you’ve come across?

Please fill out the form below and we’ll get back to you as soon as possible.